“This picture was eleven years in the making,” Heather Rawlings said, pointing to the photo of her father Bob (age 80), her son Jensen (age 20), and herself (age 51) after a hockey game earlier this year.  How many of us get to play a sport with a parent and a child? Not many, and Heather says much of it is due to Mountain Rec’s support of hockey and the incredible community she’s been a part of for the last decade: the Mountain Women’s Hockey League.

“It all started with my father,” said Rawlings. Her father, Bob, was instrumental in launching the youth hockey program in the Valley and he coached Heather and her brother Erik (now 53). Later, Heather even married a hockey player, Michael, who grew up playing pond hockey in St. Louis.  They married, and had Jensen, who started playing as a Mountain Recreation MiniMite in Eagle.

Heather decided that if she wasn’t playing, she’d throw herself into being a Hockey Mom.  She was all in, taking Jensen to Stick & Puck sessions at the Eagle Ice Rink, and even getting back on the ice going on dates with her husband where they’d play.  All along, Michael and Eagle Pool & Ice Rink Supervisor Sheryl Staten were silently working together with one goal in mind: get Heather to play on the Mountain Women’s Hockey League (MWHL).

For her fortieth birthday ten years ago, Michael registered Heather for the MWHL and she hasn’t looked back since. She’s since been a captain for five years and shares the love of the game and the team with everyone who will listen.  Heather spoke of the women on the MWHL with tears in her eyes, saying, “We’re all the same—we’re strong and well-respected and we are there for each other. We all go through some difficult things in our life, and the hockey women will be there.  You call a friend from any team in the league, and they show up with a bottle of wine.  These are my people; this is a family.  And the community is about so much more than hockey. “

Throughout that time, with Sheryl’s encouragement, Jensen started doing more than just playing hockey, he began working as a referee.  Jensen worked as a ref for club hockey, rec hockey, and for the MWHL.  In fact, his first penalty call?  Against his own mother.

Jensen’s hockey career, both as a ref and as a player, continues to this day. After playing for the Battle Mountain Huskies and captaining the state champion team in 2020, he plays club hockey at Colorado College in Colorado Springs today.

That was why, when Heather had the opportunity to play co-rec hockey this past season, she asked him if he would join her.  He agreed, and they had the unique opportunity to play hockey together all season long.  For Heather, the time going to and from practices and games was priceless. “You know how rare it is to get to spend time connecting with a college kid?  I treasure those rides, and am so grateful we had that time together,” Heather said.

As the season was coming a close, Heather had an idea. She asked the coach if there was room for one more player: her dad. Bob was worried and very hesitant, but he put his skates back on and went to a few open skates to get his hockey legs back. After a few turns around the rink, Bob was ready—and so was Jensen.  “Jensen told me at the start of our season together, if anyone touches me, they’ll have to deal with him,” Heather said.  “For the game with his grandpa, he said I got secondary protection because if anyone even breathed on Bob, they’d have to deal with him.”  The three of them played a game together and had an absolute blast.  And, for the record, everyone made it through the game.

“What started off with Jensen doing MiniMites with Mountain Rec and Sheryl’s and Michael’s influences, turned into the greatest long-term gift I ever could have imagined,” Heather mused. “Because of MiniMites, because of Sheryl and my husband and Mountain Rec, I got into hockey and gave me time to myself.  I’m no longer watching life from the sidelines.”

“Hockey is a community that brings together people who support each other above and beyond,” says Sheryl Staten, Eagle Pool & Ice Rink Supervisor. “What we start on the ice grows into so much more.  Mountain Rec may run the hockey league, but the community is what makes it great. The community is what holds us together—on and off the ice.” 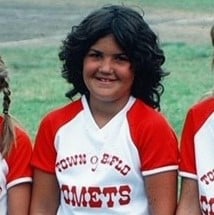